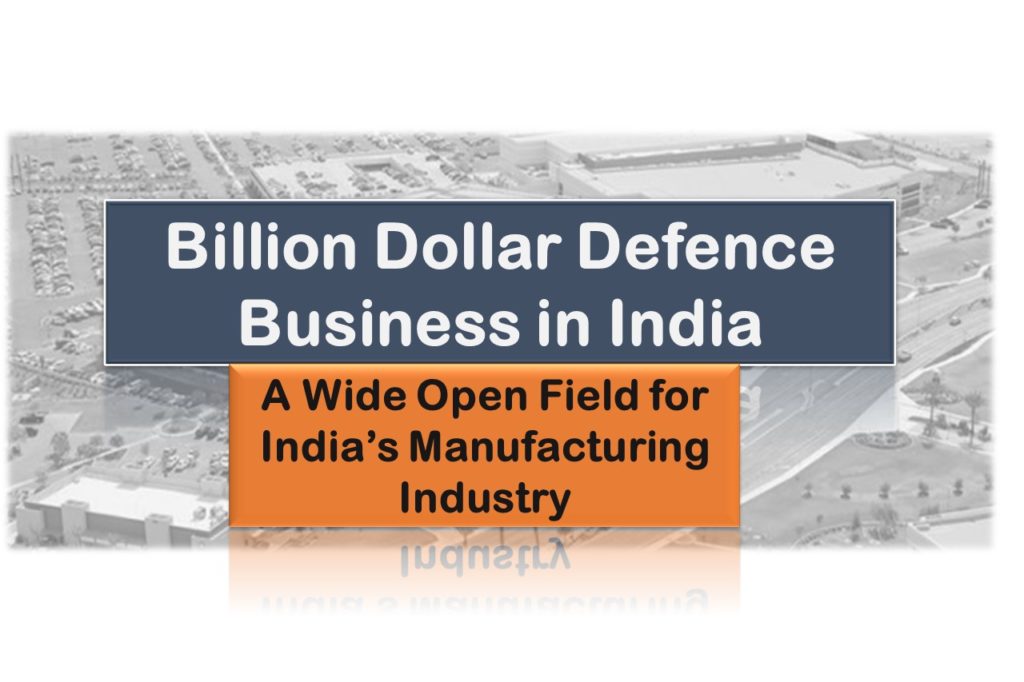 Why am I betting on India’s Re. One Lakh Crore Defence Business?

And, why you should too.

There is a Re. One Lakh Crore business waiting to be tapped and get your share in it.

Please note that, I have never advised someone, something which I think is not good for me.

Given this awesome introduction of myself ;-), let us now see, step by step, the justification for my advice why businesses should invest in India’s Defence Business.

So, what is the opportunity in Rupee terms in Defence Business of India?

The Govt. is making all efforts to increase the share of the Private Sector.

Let us first understand the main key points, which are essential to get a background of Defence Industry.

The Defence Industry from the perspective of policy and procedures by the Ministry of Defence can be broadly divided into Procurement and Production.

India is one of the largest importers of defence weapon systems in the world. The reasons are simple:

The saving grace has been India’s space technology and advancements.

It is also relevant to note that exports are negligible as compared to imports.

The present day Govt. is very very conscious of reducing imports as this has major ripple effect. Firstly, it frees the Govt. to be flexible in domestic investments and consequently boost growth. The other major imports being the fuel bill, the Govt. is keeping the fuel prices at a high level and indirectly nudging commuters and travelers use cheaper modes.

Threats to India’s security have been severe and this necessitates a vigilant and well equipped defence forces.

While India has a upper hand in an all out war with Pakistan and can hold its own with China, experts say it is found wanting on a short duration high intensity war.

So, a robust defence force is a must for the country’s security. Moreover, exports will further bolster the Domestic Defence Industry.

Major companies such Amazon, Samsung, Hyundai, Honda, Toyota are in India. Providing security to these companies and consistent policies is necessary, as if they leave due to instability, employment is lost.

Defence is one industry which is directly dependent on Govts. involvement which includes purchases, consumption, and export promotion. There are several indicators which point to the fact that this Govt. is going to invest heavily in domestic defence industry. The indicators and a brief explanation is given below.

Since the day this Govt. has taken over, it has tried every measure to increase its Ease of Doing Business ranking. As of today, India’s ranking stands at 63.

Further increase in rankings, requires major improvements as the top of 50 rankings the incremental point difference will be small.

Simply put, India will be competing with the best in the world and requires major improvements to score incremental rank improvements in EODB rank.

A clear indicator that Govt. is keen to compete on the world stage.

True to its word, as mentioned in the Defence Production and Export Policy, the Govt. of India, Ministry of defence has released two lists of weapon systems which will be import barred from specific dates which are decided depending upon on the system.

Here are the two lists:

The first list of weapon systems restricted for imports

This is a great assurance for the Private sector, as it can plan to start investing with the confidence that Govt. has itself declared that such weapon systems will not be imported.

The Ministry of Defence, GOI, has consistently mentioned that the life cycle of innovation and production is complex and hence, it is creating a Technology Assessment Cell, which will monitor such complexities.

The Govt. of India has attempted to boost the startup culture in the country. There are many instances to show, that what AICTE, and IITs and Universities have to be doing is being done by the Central Govt.

Various measures such as “Start up India, Stand up India“, “iDex Defence” have been initiated and funds have been dispersed to deserving startups directly.

In the Month of June 2021, the Govt. of India announced steps to convert all OFB board into a PSU. This marks the beginning of large outsourcing of component and sub assembly manufacturing to the 8000 MSME companies.

The Govt. is moving on these lines:- Announcement on OFB Corporatization

Of the many steps the Govt. of India is taking, this one and the OFB corporatization are two steps which will benefit 8000 MSME companies the most.

The Govt. is mandating that the DPSUs become system integrators and exit out of manufacturing. Big challenge for the DPSUs. They have to actively collaborate with Private Sector.

Importantly, as System Integrators they have to lead their sub contractors and partners to create superior products.

The MoD, GOI, released “Defence Production & Export Promotion Policy” – a overarching document covering all aspects of the Governments plan and steps which are to be followed to sell Weapon Systems to the Govt.

My personal opinion is, if an entity lists a simple policy document, it means a good and encouraging indication.

In my next post, I will for your benefit analyze DPEPP document and also highlight operative statements, research and discuss all the actions taken on each of the operative parts.

So, what does the above tell us?

The Govt. is very very serious on this. It is striving to reform both the procurement and production side of the Defence Industry.

Of all the several measures, two steps stand out.

This is a message to all stakeholders that no more importing and profiting weapon systems.

Indian businesses who are denied an opportunity to manufacture and enjoy the benefits, will jump at this opportunity.

The second measure is the publication of Defence Acquisition Procedure, which clearly tells the stakeholders the procedure to procure/acquire. It tells the officials the procedure and the steps to adhere to, and businessmen what to expect when selling weapon systems.

It is not enough to announce a policy. The ground realities are equally, if not more important. There are several ground realities which hinder highly tech intensive businesses such as Defence Businesses.

I have listed some of them below. Private sector can steer clear of these or when required can build their in house competencies to overcome these hurdles.

I have come to the end of this quick post, urging all to look at Defence manufacturing as a potential revenue generator for your company.

The above shows there is a clear demand being created and a ready market to be explored.

Let me quickly outline how I can support your institution.

I am an expert executor of tasks with techno-business challenges, and minimal resources. I have achieved 10,000 software sets sale, using a combination on the field and digital techniques, and it is a unique achievement, as there is no one who has created such products and sold in such large numbers all over the world. I have been a key contributor in the software code set creation.

I have played a key role in analyzing requirements and selection of Capital Equipment for manufacturing companies.

I have come out with a comprehensive K3 Plan for Engineering Colleges which across the board are facing huge challenges. This plan will create a strong base for colleges to become knowledge centers and withstand the multiple challenges which are confronting the institutions.

With a thorough understanding of the Defence Acquisition Procedure, released in Oct. 2020, covering all aspects of Defence Procurement and Manufacturing for 200 plus weapon systems, I support companies in adhering to the procedure for seamless business with the MoD.

I can work with you to establish connects with 500 + Licensed Defence Manufacturers in the role of facilitator for you to leverage on these connects.

I am exposed to manufacturing processes, roles of various machines, process flow management, and ERP software implementation and daily working. Read my master plan for making a Component Manufacturing Unit a Profitable Unit.

Additionally, I have an introductory knowledge of NX programming and how the software works to create machine readable programs.

I have also given out brief outline of the problems being faced by Machine Tool vendors in India and how they can make a big impact in the article titled achieving sale growth of your machine tools.

If you are interested in this billion dollar business do note that the Govt. has listed the following focus areas:

Whom to contact? DRDO. DRDO is the nodal agency which is assigned the task of developing the above systems.

If you are from a private sector company, you need to also contact the Department of Production, MoD GOI for participating in the production of defence weapon systems.

One thought on “Why am I betting on India’s Re. One Lakh Crore Defence Business?”