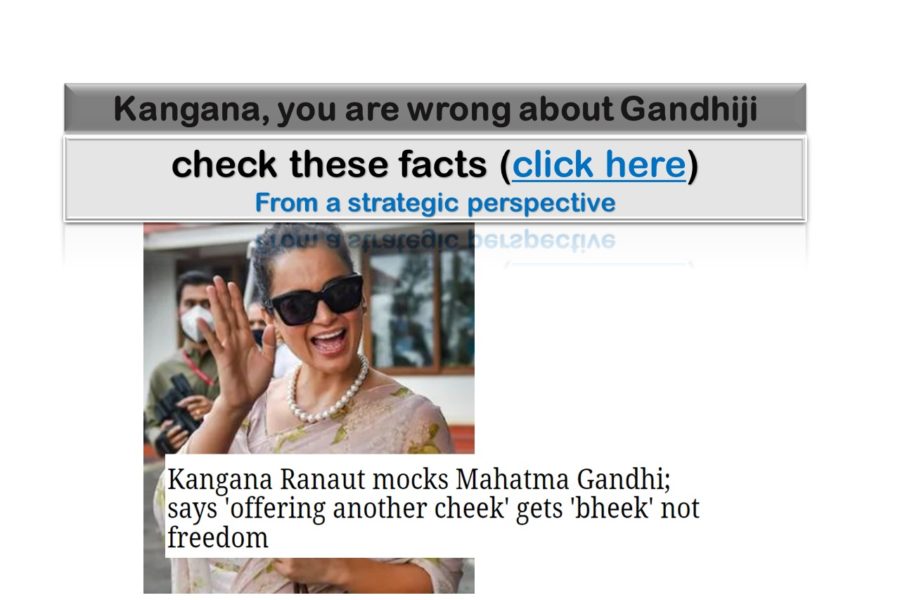 Kangana, you are wrong about Gandhiji

I have been hesitating to write this article for the simple reason that I thought it does not directly or indirectly relate to Defence Technology or Defence Production or Defence Manufacturing. Moreover, it involves a film star which in no way is connected to my line of work. I waited for BJP to respond. They did not do much. Maybe, they thought it is not worthy of responding.

Finally, I decided it was time to speak up. Because, my hero was being put in negative light. In fact, his whole body of work was being questioned.

I started admiring Gandhi since I was around 18-19, this was because of two books I read, one, Freedom at Midnight and Gandhi and how he won freedom for us.

Entire Gandhiji’s strategy to send back British was marvelous and British had no clue on how to counter him.

I will support and back my statement that “Kangana, you are wrong about Gandhi” with the following points. So, lets jump right in:

1. Poland lost the war with Germany in just a few weeks as they had only horses and not many weapon systems

If you were to look up war history, in the second world war, one of the first Country Hitler invaded was Poland. And, Poland thought their well trained horse regiment would win the war for them. Do you know why it happened? Because, Poland never made a realistic assessment of their strengths – Gandhiji did that and more.

2. Gandhi leveled the Playing field rather the Battle Field with Non Violence as the weapon

If you have read William L Shirer’s book “Gandhi”, you will see how Gandhiji broke the British and made their war machine meaningless.

In simple words, he levelled the playing field which was in favor of the British for two centuries. Gandhiji, turned the situation on its head in a matter of twenty years.

3. What could Subhash Babu do?

Let us see with clarity what Subhash Babu did.

He met Hitler! He sided with a pre Hiroshima Japan. He was talking to Mussolini. Imagine, is India even capable of working with a dictator? Is India associating with an dictator even today?

So, why did Subhash Babu ide with these whom their own country people despite now. They are not even worth remembering now.

Simple, he wanted the military expertise.

Just consider what Gandhiji gave us. A legacy of non violence as an instrument of war or for peace.

Today, when India proclaims to the world that we are not a warmongering nation everyone even the Chinese have to sit quiet and listen.

Today, when we announce in the UN that our nuclear policy is no first use policy – we have a legacy to support us.

This is not possible at all with a history of war.

5. Remember wars are won in factories

If we were to look at the second world war closely, and dig out the details we will see that Tanks for the Russians were supplied by you know whom? Americans.

As Hitler was on a rampage mode, and fears of discovering the Nuclear Bomb threat loomed, it was the factories of Americans which saved the day.

a. Do you know that American women worked in factories and manufactured tanks, which were supplied to entire Europe?

b. Do you know our armed forces strength is assessed based on the number of days we can wage a credible war. Just like how many days a movie can bring in the audience!

c. What were the weapon systems capabilities of the Congress? or the resistance in India. None

d. Do you know a Car Company in USA manufactured Tanks – Americans had few tanks in the beginning of war.

Just want to tell you that fighting another country is more complicated and has multiple dimensions.

6. What happened as the British indicated it was time to leave?

As soon as British sent signals of leaving India, the dormant Muslim League (formed in 1905- Version 1) woke up and demanded a separate homeland.

Imagine for a second, that the national leader who was driving our national movement had said we will have a divided country from the beginning of his leadership – somewhere in 1920’s, this nation would have been broken down into many pieces and some pieces would have still been with the British and French!! Just think about it. He had to unite the country before putting pressure on Britain to leave the country.

The only partition British did was of Pak and India. They left the remaining part to be done by ourselves.

Gandhiji fought the hardest of battles. With an opponent who was formidable, with no weapon systems and the possibility of division lurking in the back of his mind, an cunning opponent and a people who were largely docile.

So your cheek comment has no merit nor relevance.